The Covid-19 pandemic and the ensuing nationwide lockdown since March 2020 has severely dented the Indian real estate sector that was already grappling with slowing sales and rising unsold inventory levels since the past few years. While sales of residential units across eight major metros in India – Mumbai, National Capital Region (NCR), Bengaluru, Pune, Chennai, Hyderabad, Kolkata and Ahmedabad – hit a 10-year low, office vacancy rates across these metros are near four-year high.

Prices of residential property in these eight major metros witnessed a sharp fall in the first half of 2020 (H1-2020) with Kolkata witnessing the steepest drop of 7.5 per cent to Rs 33,433 per square meter (sq. mtr.) during this period, says the latest report by Knight Frank India (See table below: Residential Pricing per square meter). Sales of residential units during this period across these metros dropped 54 per cent to a decadal low of 59,538 units as compared to 129,285 units in the year ago period with new launches dropping 46 per cent to 60,489 units. 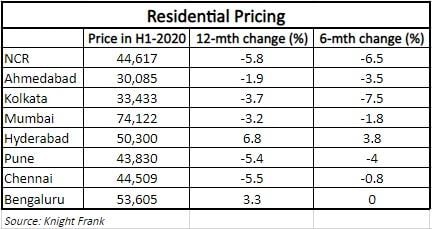 A similar trend was witnessed across the office market. Office demand and supply, according to Knight Frank, came to a near standstill during the April – June 2020 quarter of calendar year 2020 (Q2-2020) with total transactions and project completions falling 79 per cent year-on-year (YoY) during this period.

“Transactions in H1-2020 fell by a massive 37 per cent YoY to 17.2 million sq. ft., the steepest in a decade. Demand fell the most in Pune and NCR markets at 47 per cent and 45 per cent respectively, while Mumbai transaction volumes fell by a comparatively modest 17 per cent YoY due to two big ticket leases totaling 1.8 million sq. ft. that amounted to almost half of Mumbai’s total transactions and salvaged an otherwise disastrous period. Bengaluru and Hyderabad office market transactions fell by 42 per cent and 43 per cent, respectively,” the Knight Frank report said. As India adopted the work from home (WFH) culture over the past few months, office vacancy levels across these metros saw an uptick with most companies letting go of the leased spaces to save on cost. Office rentals in this backdrop across these markets also witnessed a drop with the NCR recording the sharpest fall of 8.8 per cent to Rs 844 per (square metre) sq. mt. per month. At an aggregate level, the combined vacancy level across these markets moved up to 14.1 per cent in H1-2020, as compared to 12.7 per cent in the corresponding period in 2019.

“Bengaluru accounted for almost 56 per cent of the space surrendered during H1-2020. Kolkata and Ahmedabad which are the smallest and relatively less established markets among the eight under review saw vacancy level jump the most, by 9 and 8 percentage points YoY respectively to 41 per cent and 42 per cent by the end of H1 2020,” the Knight Frank report said.